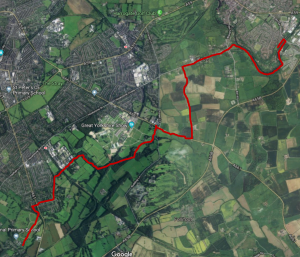 Walking in the footstep of a Northern Saint

A glorious day greeted the pilgrims for the inauguration of the “St Robert’s Way” in Harrogate this Bank Holiday Monday. 39 people joined the 7.5 mile walk from Pannal to Knaresborough to honour and recall the Northern Saint Robert of Knaresborough, whose 800th anniversary is being commemorated this year. Pilgrims came from as far as Sheffield and Glasgow, and included the Vicar and Curate of St Robert’s Pannal and the Bishop of Ripon.

Bishop Helen-Ann said “‘What a wonderful day!  Pilgrimage is an ancient expression of Christian devotion and exploration, and it is a great thing that St Robert’s Pannal have taken this initiative.  I reflected both at the start of the walk, and at its end when we had reached St Robert’s cave in Knaresborough that walking enables you to slow down and notice things.  Discipleship is about attending to the little details, as well as the big picture.  Walking together in an intentional way aligns our faith journeys with those who have gone before, and who will continue after us.  Excellent too to celebrate a northern saint!”

Although never officially canonised, Robert (c. 1160 – 24 September 1218) is considered as one of the outstanding saints of the early thirteenth century. He lived much of his life as a hermit, based at the cave by the river in Knaresborough. From here he served the local poor by farming land and attracted many followers and visitors who were attracted by his piety.

Saint Robert’s feast day is on 24 September and there are many more events planned to mark 800 years since his death.

A few photo's from the walk are available on our Image gallery Page here.