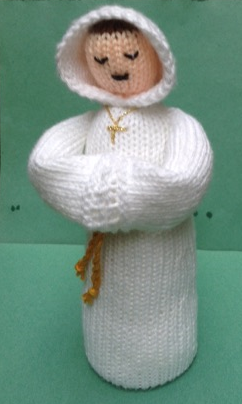 Pick up one of the St. Robert @ FEVA leaflets from the Library, or around the town, or download a copy here.

Look in the shop windows in and around the Market Square during FEVA from the 10th to the 19th August and you'll see lots of knitted figures of St. Robert.

Some of them may be hiding!

When you've found one, look at what he is holding.
In his hand is a card bearing a letter. Use these letters to make the answer to the questions below.
All the answers can also be found on the St. Robert website.

2.  What did St. Robert say to King John that he couldn't make but God could?

3.  What animal did St. Robert tame for use on the farm?

Once you've got them all, add your name and email address and leave this leaflet in the library.

5 correct answers pulled out of the box will receive tickets to the St. Robert celebration concert on 21st September, with all entries getting the chance to win one of the knitted St. Roberts.